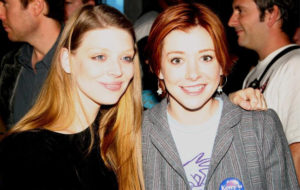 You’ve said before that you give audiences what they need and not what they want. What do you mean by that?

What I mean, and I got a little shit for saying that after Tara’s death — fans thought it was demeaning, but it’s not; I am a fan, I watch the show every week to see what will happen — but the fact of the matter is, no one wants to see Romeo and Juliet die happily married. Everybody feels terrible for them, wishes they could get away, but if they did, people wouldn’t remember the damn play as much. I think that people need two kinds of fulfillment: one in which you give and one in which you hold back.

Part of fulfillment is need, is longing, is being unfulfilled, that’s the nature of tragedy and a lot of drama. Very often, what the fans want, they get. But very often, what they want, they can’t quite have, because we want them to feel the way our characters felt, we want them to feel how Willow felt after Tara died. Some people will never forgive me for making that statement, but I’m not saying I know better, I’m saying that the narrative exists beyond me.